Having just spent the last two days at the Next Library Conference, I wanted to jot down some reflections from the conference. I attended three sessions (in addition to the keynotes):

I found the two sessions on human centered design and living labs to be incredibly helpful and motivating, especially since we’ve been using some user research processes for our library website redesign. Techniques that put users first really help get your ego out of the equation. I also appreciated the push in these sessions to break down problems into defineable parts and find workable and testable solutions to those problems.

During the Human Centered Design one of the presenters from Aarhus Public Libraries(Jannik Mulvad) talked about some of the user research they did in developing their IT services. I was really taken with the idea of visiting users in their homes and other environments to understand their needs better. I had read a little bit about this in Just Enough Research (which is a great book).

We also did a service journey excercise based on some of the work done by CPL. The exercise they gave us was to chart a recent experience at the grocery store, as seen here: 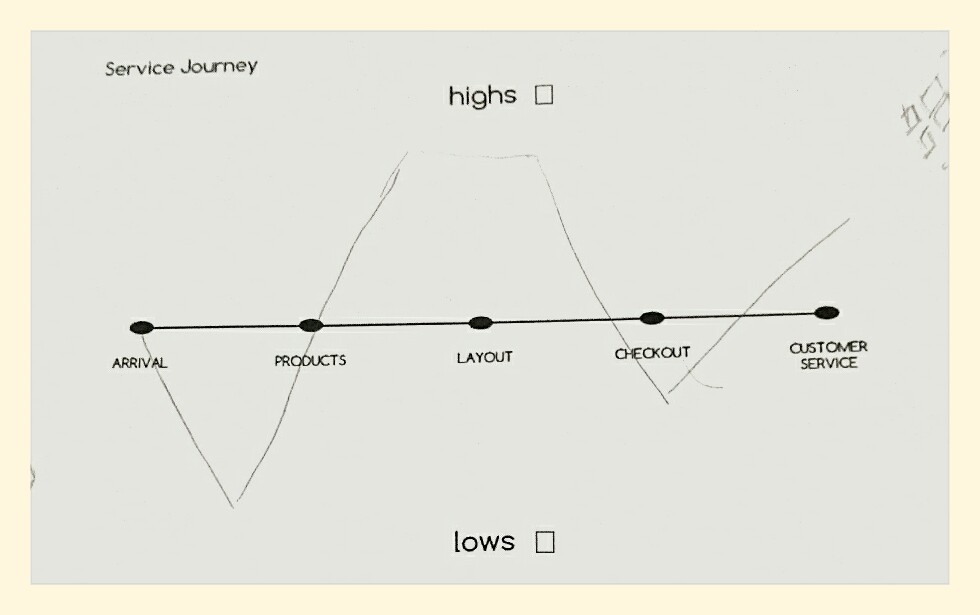 The service journey seemed like a useful way to track an experience and to have a structured conversation with the user about their experience. They will tell a story that you both understand and will provide actionable insights.

Prototype your way to understanding

Prototyping helps identifies biggest risks of a project, not to test overall viability or desirability. #nextlibrary2014

The example that I loved was a prototype iPad interface that McDonald’s used to test a new service. They set up these prototypes in a store and let people “use” them, even though they didn’t do anything.

This idea resonated with some of the advice from Lean UX (book and article). In that book, Jeff Gothelf talks about testing a new feature by putting a button that does nothing on your site to see if people will click on it (among other suggestions, of course). We recently conducted a usablility test on our sitemap with a barebones page with nothing but navigation on it. Certainly that’s one way, but the idea of “sneaking” little tests into an operational environment is very appealing too. There’s no reason why a website can’t be a lab for experiments.

I am torn between the lightness of prototyping versus the heaviness of a well-planned and executed programs/services. #nextlibrary2014

The living labs session leader suggested to me afterwards that you have to use your big questions to guide your experiments. In order to “throw something against the wall”, you need to have a wall to begin with (and maybe some basic sense of the wall’s construction and location, to extend the metaphor).

After the conference, I feel like our pursuit of user centered research practices is a good one, but there are so many techniques and approaches to try and learn. A website redesign is one way to try out these techniques, but I would like to be able to iterate through them more quickly.

My thought was that a “12 months, 12 ideas” program could be really interesting to try out. Every month you go through the ideation, prototyping, and evaluation process for some new feature or idea. I think they key for this work (and the less of prototyping in general) is that the idea can be a very small unit. An idea doesn’t have to be an entire new service or program.

Breaking out of thinking of everything as an entire end-to-end process is very valuable, but also a challenge in the press of weekly and daily duties. Sometimes it is easier to plan your time around big blocky projects and objectives, rather than a series of iterative tasks. The conference pressed the need for this kind of experimentation though and it’s one of things I hope to keep in mind after the conference.